Gloves on the boardroom table: Unlocking the secrets of selling

In 2002 I read John Kotter and Dan Cohen’s influential book The Heart of Change. I was captivated by one story: ‘Gloves on the Boardroom Table.’ 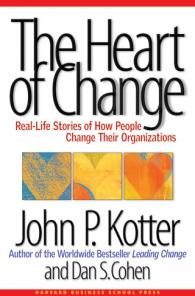 The ‘Gloves on the Boardroom Table’ story comes from John Stegner who worked as a manager for a billion dollar sized manufacturer.

Stegner believed his company was wasting millions of dollars through wasteful purchasing practices.

The potential savings he believed were huge – a billion dollars over 5 years.

To capture these savings Stegner knew he would have to persuade his bosses that the savings were possible. But few of his bosses shared Stegner’s views that their firms purchasing practices were riddled with inefficiencies.

To overcome his bosses’ scepticism and complacency Stegner focused his efforts on finding one vivid example of the company’s poor purchasing habits that would highlight the bigger problem.

To do this, Stegner commissioned a summer student intern to investigate and calculate costs of purchasing a single item – work gloves. Work gloves were a clever choice because this was an item workers in all the companies’ factories wore.

The intern discovered the factories were purchasing 424 – yes, four hundred and twenty four – different types of gloves from multiple suppliers, and all were separately negotiating their own prices. Prices for the exact same glove ranged from $5 to $17.

Next, Stegner had the intern collect a sample of every one of the 424 different types of gloves and tag each one with the price paid.

Finally he asked the student to gather up all the gloves and pile them on the large expensive table in the company boardroom. Ready, Stegner now asked all the division presidents to come and visit his “glove shrine.”

“What they saw was a large expensive table, normally clean or with a few papers, now stacked high with gloves. Each of our executives stared at this display for a minute. Then each said something like, “we really buy all these different kinds of gloves?” Well, as a matter of fact, yes we do. “Really?” Yes, really. Then they walked around the table…. They could see the prices. They looked at two gloves that seemed exactly alike, yet one was marked $3.22 and the other $10.55. It’s a rare event when these people don’t have anything to say. But that day they just stood with their mouths gaping.”

Each one of the Presidents experienced a mind shifting Aha! moment.

As I read Stegner's story I experienced my own Aha! moment. If we could teach salespeople how to repeatedly create Aha! insights with their clients, we could revolutionise the practice of selling.

What would happen, I wondered if we could train salespeople to repeatedly create Aha! insights.