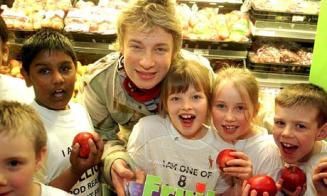 In 2005 celebrity chef Jamie Oliver accepted the seemingly impossible challenge of getting all primary schoolchildren in an entire London borough to eat heathy school lunches.

But against the odds Jamie eventually got most children in one school eating fruit and vegetables at lunchtime.

But there were a dozen kids who stubbornly resisted all attempt to eat fruit and vegetables. They stubbornly refused to eat anything except chips, burger and Turkey Twizzlers (a disgusting fake food made from deep-fried turkey parts).

So Jamie tried something new. He invited the dozen ultra-laggards to a special cooking class.

He asked them to chop and mix ingredients for a salad and make up and cook some marinated chicken drumsticks.

Jamie dramatically plonked cooked drumsticks on the table. Then Jamie eyeballed the kids and declared,

Then he turned his back and walked away. Then remarkably the most resistant kids on the school start milling around the bowls of food they had just prepared. Gingerly, and then eagerly, they began to devour the very foods they’d been rejecting for months.

Leveraging the power of self-persuasion
Jamie Oliver is a remarkably gifted influencer. In getting the kids to cut up their own ingredients and cook their own chicken drumsticks he eliminated much of their resistance to eating what had been cooked. We are less likely to resist or speak out against something we have personally been involved in and created.

This remarkable story on the power of self-persuasion -helping people find their own reasons for wanting to do something comes from Les Robinson’s inspiring book Changology: how to enable groups and societies to do things they’ve never done before, Scribe, 2011.