As a result, psychologists and neuroscientists tell us is that we are all susceptible to particular biases that cause us to blunder. The reason we can be simultaneously smart and dumb is because while we may have one brain, we have two rival minds. 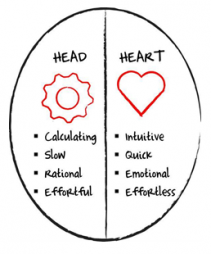 Neuroscientist David Eaglemen believes the brain is “best understood as a team of rivals.” In his view, “the brain contains two separate systems: one is the fast, automatic and below the surface of conscious awareness, while the other is slow, cognitive and conscious.”

Imagine you are a charioteer and your chariot is pulled by two powerful horses, a white horse called Reason and a black horse called Passion. Reason is always trying to pull you to their side of the road, while Passion pulls you to the other side.

Your task as the charioteer is to keep Reason and Passion under control so you can stay on the right track.

To illustrate the tug of war between Head and Heart that goes on inside our mind consider the following scenario psychologists call the ‘trolley dilemma.’

Imagine you are walking home when you see a trolley careering down the train tracks towards 5 students crossing the track on their way home from school. You can’t stop the trolley or warn the students. The only way you can save the five students from certain death is to throw the switch and divert the trolley onto another track where only a single worker will be killed.

Most people don’t think too long about this problem. They throw the switch. It’s better to have one person killed than five. This seems a smart, rational decision, even though it means killing an innocent bystander. Head overrides Heart’s concerns.

But now consider a slight change in the facts. Picture the same trolley hurtling towards the five students. But this time you notice there is a fat man standing on a footbridge overlooking the tracks. The only way you can save the five students is to push the fat man off the bridge onto the tracks below and block the trolley. Do you push or don’t you?

This time most people struggle with the idea of killing an innocent bystander. In both cases the maths are the same, you are trading one life for five lives. But people react much more emotionally when they have to personally push someone. The problem is no longer an impersonal mathematical calculation. It is now a highly personal, emotional decision. In this case, Heart overrides Head.

When it comes to making decisions Heart decides first. Head tracks and monitors Heart’s decisions and it can overrule them when it thinks Heart is wrong. In short: Heart decides, Head reviews.

In the battle for the brain however Heart more often than not wins especially when: