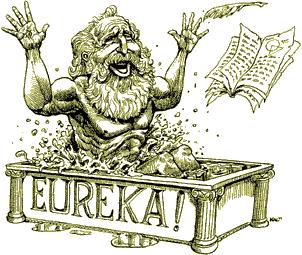 Because of their motivating power, insights are often called Aha! or eureka moments. Our first story of a eureka moment comes from ancient Greece. If you remember Archimedes, who lived in ancient Syracuse, was the Leonardo da Vinci of his day. He was a “master of thought”, a mathematician, scientist, and inventor.

His King, Hieron II suspected his royal crown maker had cheated him. He asked Archimedes to determine whether a recently commissioned gold crown had been cheapened by the addition of cheaper, inferior silver.

However there was a catch: Archimedes was not allowed to melt the crown or deface it in any manner. Although he was brilliant and knew as much as anyone about mathematical calculations and precious metals, he stalled.

His very life was on the line, but try as he might to examine the problem from all angles he failed to find an answer. The metal had been crafted into a series of leaves, and it wasn’t clear to Archimedes the genius, quite how to measure the exact volume.

According to most reports he tried all sorts of answers. But none worked. Then he took a rest. Stepping into a full bath tub, he caused the water to spill over the edge. At that moment he froze.

He had his answer: the volume of water displaced from the tub was equal to the space his body took up. “Eureka!” he shouted, “I’ve found it!” Archimedes knew silver is lighter than gold, so a block of silver equal in weight to a block of gold would be larger and therefore would displace more water. Therefore, a crown that was a mix of silver and gold would displace more water than one made of pure gold.

Archimedes calculations proved the goldsmith had indeed cheated the King.

For Archimedes it was “utter euphoria”, he jumped out of the bath, and oblivious to the fact he had forgotten to dress, ran through the streets of Syracuse shouting “eureka!”